Where is the “Study” in Study Abroad: Australia? 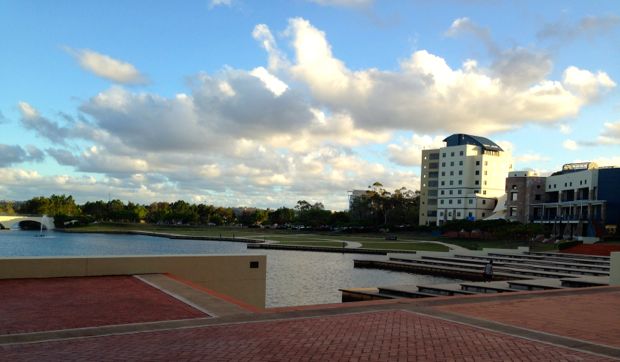 Despite what my friends and family believe, yes, I am going to school here. Granted, even Bond’s campus looks like a resort where the sun is always shining.  But I am putting the “study” in Study Abroad in Australia – I promise! Now that the semester is just about over (I’m officially a senior after Tuesday so, that’s weird) I think I can successfully look back on my time as an Aussie student, attempting to grasp just how much I have learned here. And most of it wasn’t even in the classroom.

The biggest adjustment for me was going from a 30,000-person, urban, and physically massive American university to the private home of 2,000 that is Bond Uni. That alone is like navigating a foreign land. I spent the first two weeks of class being at least forty-five minutes early because I couldn’t comprehend that it only takes 3 minutes to walk from one edge of campus to the other.

It also required a little trial-and-error to figure out that it’s not quite socially acceptable to roll up to class in your pajamas. Don’t get me wrong – the fashion here is one of my favorite parts of this country so making me put real clothes on wasn’t exactly like pulling teeth. But damn, these Aussies are good looking!

The atmosphere is professional, colorful and makes me feel like I should be in a catalogue all the time. Well-known for its architecture, the campus structure invites you to spend as much time as possible studying at a table outside or on the steps by the water. And every facility is high-tech, high-quality, and more than accommodating. I think I might actually miss the library.

I was told more than once before coming to Australia that the grading would be difficult. Difficult is the wrong word, it’s just different. The concept is to build your grade up rather than deduct points for things you miss or get wrong. But it is true that grades are comprised of far fewer assignments than most class structures in the US, which is intimidating to some.

At the same time, and this is probably due in part to being a small school, the faculty and resources are extremely available. The student-teacher relationship at Bond is really casual. My jaw practically dropped to the floor when students would call the professor by their first name and I had flashbacks to being reamed out in the second grade for calling my teacher “Lisa.” That’s just how it is here – everything is nonchalant; being ten minutes late is being on time; and lattes are drunk like water. My favorite part about Bond, though, is the people. The school is largely international and my classmates are literally from all over the world. Class discussions are like a mini UN, where being from America or South Africa or Switzerland means, whether you like it or not, you are the representative of the experiences and opinions of America or South Africa or Switzerland.

Of course, I learned from class material (and will admit through clenched teeth that finance from last semester did get put to some use.) But the best learning experience was being thrust into a different academic environment with others in the same boat, and learning from them, too, in the process. It was the most natural way to be completely out of my comfort zone.

Even after only one semester, Bond grew to feel like a community of which I was a part. And that’s not just because there is a bar on campus. That was the cherry on top.

Kierstin Darragh is a student at the University of Maryland and a TEAN Featured Blogger. Kierstin is currently studying abroad with TEAN on the Gold Coast, Australia.