Growing up my whole life I have always been a city girl. My house is 20 minutes outside of New York City, and my school is 30 minutes from D.C. That being said, I thought I would know exactly what to expect coming to the fifth largest city in Australia, Brisbane. I was so wrong.

Brisbane is unlike any city I have ever seen, and not just because the cars are on the left side of the road. I looked out my balcony on the 16th floor to see a winding river with numerous bridges of different abstract shapes and sizes, a giant Ferris wheel on the opposite side and a strange-looking boat traveling down it, which I later figured out was the ‘City Cat,” a popular form of public transportation in the city.

Naturally, within hours upon arrival, I found myself making my way to well-known mall that was apparently down the road from my apartment. It is called the “Queen Street Mall.” The only problem was that I could not find any large structure on this street that resembled a mall. That is because this mall was a never-ending road blocked off to vehicles, with stores lined up along the sides, and restaurants and bars right in the middle of the street. This was my kind of shopping experience, not to mention the stores I walked into were significantly cheaper than those I find on Broadway. Not everything is more expensive in Australia! 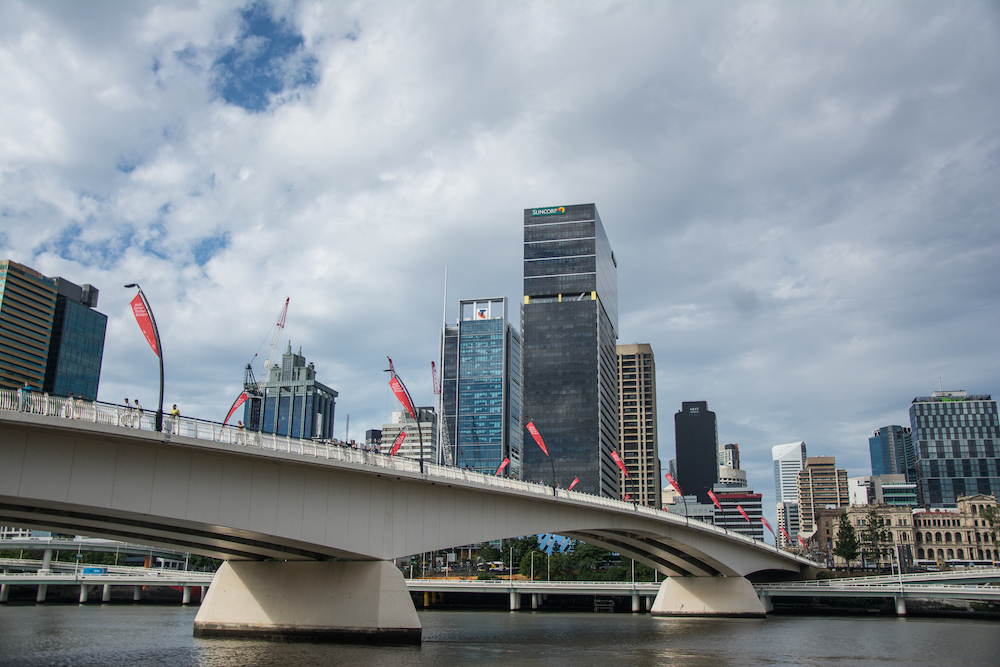 Next on my list was to find the closest beach to visit after finishing up class during the week. Turns out, there happens to be one right across the bridge from where I am living. Except this beach is special. Because Brisbane doesn’t have an actual coastline, they simply made their own beach! It is called the “Streets Beach” and it is a public pool disguised with sand and palm trees. All you have to do is splash the chlorinated water around a little bit to create some waves and you have a much safer version of the Pacific Ocean! Just kidding, but it is an awesome spot to catch some rays right in my own backyard.

Along side the beach at South Bank (the area across the river), there are public grills for people to BBQ. I was disappointed to learn that the term “Shrimp on the barbie” was actually an Americanized term with little relevance or history in Australia. But, that won’t stop me from bringing over some shrimp kebobs and trying to live like a true Aussie. I also found out I can feed my shopping addiction at the weekend markets, consisting of local artists, jewelers and designers. I suddenly felt like there was so much to do in so little time!

After less than a day in Brisbane, I was in love. Each street is filled with color and innovative design. Everything seemed to be cooler, even the sides of buildings! Oh, and did I mention there are statue kangaroos on the sidewalk in case you feel as though you are missing out on the Australian wildlife in such city atmosphere? I am so excited to call Brisbane my home and begin my new life in my new city.

Gabrielle Cerami is a student at the University of Maryland and a TEAN Featured Blogger. Gabrielle is currently studying abroad with TEAN in Brisbane, Australia.