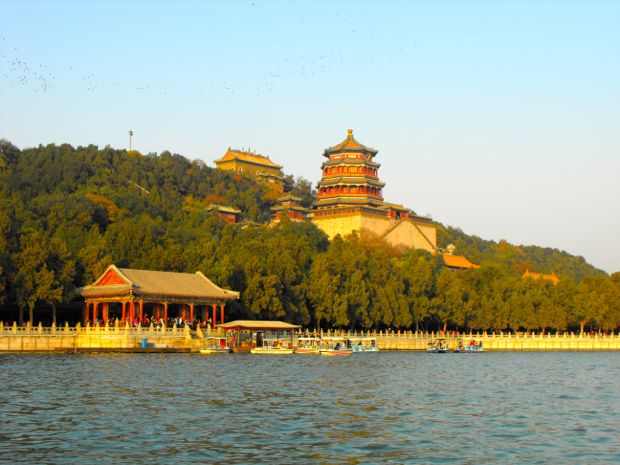 Before I came to Beijing at the start of September, I literally thought that the city was always cloaked in the dullness of grey pollution. It is true, Beijing does have – as well as the rest of China – a serious pollution problem caused by their extreme usage of coal in factories and the country’s low environmental standards, but no one ever talks about how on a good day the city’s sky can be just as azure as a New England summer’s day. A happy surprise, to be sure, when I witnessed my first brilliant Beijing day, but these days are indeed rarities that must be made use of. So where do I like to go on these amazing days?

The Summer Palace may not be as famous as the Forbidden City (故宫Gùgōng,), or the Great Wall (长城Chángchéng), however it is by far one of the best preserved and historical regions in Beijing.

Whenever I go to the Summer Palace, I always find myself in awe of Chinese garden culture, because essentially all the Summer Palace is are an arrangement of gardens with buildings for the emperor’s summer rests. The place is very traditional in that it follows very well the ideals of fengshui. There is ample amount of water, as can be seen in the above photograph, and there are hills almost all around the outskirts of the garden. These are properties that are supposed to be good for energy. When I come on a weekday and there are only a few tourists I get to feel like the emperors of the Qing Dynasty did: the atmosphere breeds patience and a slow, yet ardent audacity. I am sure that is exactly the kind of respite an emperor would require.

The palace has its roots so far back that Beijing was not even called Beijing yet. It was called Yanjing, and it was the Jin Dynasty in the 13th century. On the hill shown above – known as Longevity Hill (万寿山Wàn shòushān) – one of the Jin emperors decreed a palace be built. The Jin fell, but they would later be known as the Qing, and hundreds of years later they would regain power as the Ming lost theirs. The Qing Dynasty was born. The Ming had ruled from Beijing as well, but it was not until the Qing that the Summer Palace was truly beautified. When I go here I always buy minimum entrance, and since I am a student at Tsinghua University I receive a discount. Most places in Beijing are like this and give student discounts. Entrance to the Summer Palace is only 15 RMB – which is $2.50. I have learnt that buying a general entrance to most places is enough, especially if I have been there before and seen everything. Besides, the most enjoyable part of going to the Summer Palace is walking and getting some introspection.

I am sure the emperors used this palace for that exact reason.

But none of this could be here today. During the Opium Wars there was an Anglo-French Invasion during which other parts of the Summer Palace, now referred to as the Old Summer Palace (圆明园Yuánmíngyuán), were destroyed and pillaged. Even today if I went to Paris to their museums and London’s too, I could find ancient and irreplaceable antiques that were stolen during this invasion. Thankfully, not all was destroyed and not all of the Summer Palace’s relics were taken off to Europe. Today there is a discussion in the international community about whether these relics should be returned to China, much like how the Elgin Marbles have had much controversy over whether they should stay in London or returned to Athens.

I have found it a good experience to ponder this question while promenading the Summer Palace’s esplanade, feeling the cool breeze come down Longevity Hill and watching the sun glimmer on Kunming Lake. I imagine the emperors walking a steady gait with their entourage in tow, a battle in their mind as to the right path of action for their people. As a foreigner, I am perhaps an orientalist when I imagine such a scene, but I feel that as I have experienced ancient China firsthand it is not orientalism but instead deference for the culture that oftentimes in the bustling concrete and steel of Beijing seems purely a fantasy – a lost part of antiquity left only for the dead. The preservation of the Summer Palace is moral, I think, and a necessity in its reminder that though the world is growing constantly smaller, in many ways that is only an illusion; some gaps are more like fissures if I look close enough. This immaculate palace is a reminder that at heart Chinese are definitively Chinese.

Every time I go to the Summer Palace from now I cannot help but wonder: how more amazing and insightful would this place be, how much better would it serve to remind the Chinese people of themselves and where they came from, if they had all their relics restored to Beijing for posterity?