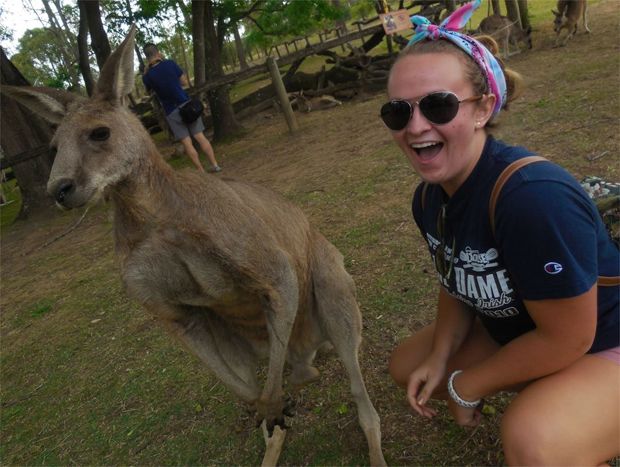 Right before I came to Australia I read a story in which the main character made a to-do list for his upcoming trip to China.  It included only very simple things, but encompassed a wide enough range of experiences that he would not get too engrossed in his work; it would force him to really “stop and smell the roses.”  I also decided to make a to-do list, and just recently I crossed the last item off my list, in preparation for going home.  I’m now back at school in Pittsburgh, but looking back on this list gives me mighty fine memories of my time in warm, beautiful Australia.

Essential when you go to Australia.  Through TEAN, we took surfing lessons at Bondi Beach, which was really cool!  It’s neat to feel a part of the long and rich surfing tradition in Australia, even if you’re as rubbish at surfing as I am.

2. Sunrise run along the harbor

I had this grand picture in my head of running around the harbor, seeing the opera house and the bridge just at sunrise.  The run was completely perfect and exactly as picturesque as I’d hoped.  At that time of day nobody’s milling around Circular Quay yet, so you can go as fast as you want. When sun hits the opera house just right it’s absolutely gorgeous.

I put this on my list before I’d known that it would be included in the TEAN orientation, and it was such a fantastic experience.  I didn’t even know that it was a relatively common thing to do, but seeing the opera house and the harbour from a bird’s eye view was awe-inspiring.

It’s a rite of passage for all students studying in Australia to try vegemite, and mine also happened during orientation.  It’s literally the dregs that are scraped out of the bottom of the beer barrel and it’s supposedly good for you, but that doesn’t make it any easier to eat.

I do this quite a lot back home, but this is always the best way to learn the city.  You often find the best places by stumbling through the streets and suddenly happening upon hidden gems.  We read a story in my Australian literature class where the author advocated the best way to travel throughout a city was to take a wander, and so more often than not I did just that.

I’d intended to actually go out and see a football game at the stadium, but a chance to watch the footy final and cheer for the Melbourne team with a bunch of locals while in Melbourne is a chance that shouldn’t be passed up.  We watched the game at a pub with the locals for the first half.  We ended in the square, where the Melbournians were celebrating the victory of the local Victorian team, the Hawthorn Hawks, and the excitement was immense.

Since we live in the city, we don’t actually get to see kangaroos hopping along the side of the road like we might in more rural parts of Australia.  Yes, this actually happens in this country. We saw lots of kangaroos at the Lone Pine Sanctuary in Brisbane, where they’re less harried and not chased around by little kids as much as in the sanctuary in Sydney.

I wanted to get out of the city a bit, and while Sydney is a great area that you could spend years exploring, we also took trips to Cairns, Melbourne, and Brisbane, all fun in their own unique way.

In addition to travelling outside of the city, I also wanted to explore within it, and buying a bike was one of the best decisions I’ve ever made, even as an addition to the plentiful public transportation options.  Biking to the beach was consistently one of my favorite ways to pass time in Sydney. Not just see the opera house; I wanted to draw it. I did, more than a handful of times, which was satisfying.  It’s a beautiful building and enjoyable to draw, the curves and shading an interesting riddle to capture on paper.

While this had originally meant getting to see Uluru, as a person who likes geology, I was not disappointed.  I got to explore countless beach cliffs and I went on a few trips to the Blue Mountains, where we went hiking, abseiling, and canyoning through a river gorge that offered stellar views of the native geological features. The last one to be checked off my list, I participated in the Electric Run held in Sydney Olympic Park. It was a really cool night run filled with colorful lights and music and topped off with a huge dance party in the basketball dome.  I doubt I’ll ever be able to do a run as fun as that one, so I’m glad I made the effort to do it!

Georgia DuCharme is a student at the University of Pittsburgh and a TEAN Featured Blogger. Georgia recently completed her semester abroad with TEAN in Sydney, Australia.